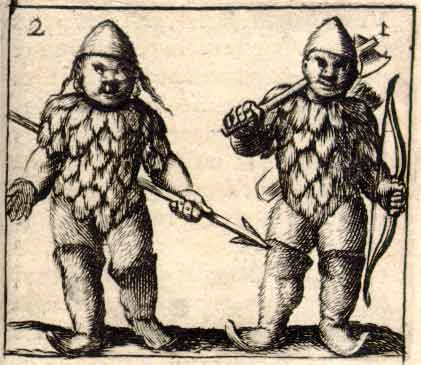 La Martinière’s drawing of a woman and a man from Novaya Zemlya – both of whom had been kidnapped and sent as ”native samples” to the king’s court in Copenhagen.

DENMARK in need of Truth Commissions!

1. Denmark ruled huge parts of Sápmi for centuries.
2. Denmark still do exercise supremacy over Greenland and the Inuit people.
3. Denmark were guilty of some of the most outrageous crimes in these matters; i e kidnapping, humiliation and wore the main responsibility for the harsh witch inquisitions, where at least 35 Saami shamans (noaidit) got executed in the Northernmost districts. This state terror in Norway persisted throughout a very long period, in fact for a full century, from circa 1590 into the 1690s.
4. Denmark sent their ”son”, the Military Officer Schnitler to steal Saami land as a border investigator; whereas he saw the Saamis as intruders in their own true habitat; in places like Hartkjölen/Hestkjölen.

There are more arguments, but we will leave it there by now.